Screwdriver Battery Does Not Take Charge

First, a few words about the four-year operation of the Bosch GSR 12-2 screwdriver, which I bought in December 2008. It is autumn 2012, and during this time it has come in handy to me countless times. Because screwdriver. Since the tool is universal, then they can not only turn screws, but also drill holes in wood, brick and metal, knead putty, grind wood, etc., which I actually did.

4 years after the purchase, it looks outwardly slightly wrapped and looks like this: 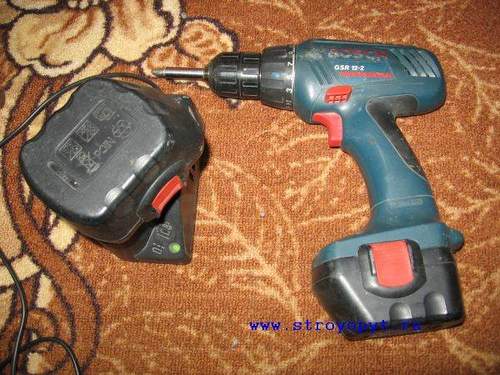 On the mechanical side there was a backlash of the cartridge for a couple of degrees. The bits that come bundled in a plastic container are kind of weird. Crosses are more or less normal, and then I broke 2 pieces, but they are flat-faced. broke everything to one. And this despite the fact that the need for them arises much less often. Everything else works without comment: the speeds switch, the batteries snap in and out, the trigger works. The screwdriver has never been opened. If you turn it on after a long break, then the smell of burning comes from the brush unit, but it seems that after a certain period of work it begins to weaken. So far, the smell has no effect on work (power, etc.). Another feature compared to the new one: turn on at the second speed and throw the button. the spindle stops without a spark, a powerful spark jumped on the new one. In general, everything would be fine if not for batteries.

After the purchase, I wrote a short review of this screwdriver. BOSCH GSR 12-2 screwdriver There are many photos and a small test for power / torque. When the batteries were still in good condition, without recharging, 30-40 6×120 screws could be screwed into a dry tree. It seems to be a good result, although I have nothing to compare with.

How to restore a screwdriver battery

I hardly use a screwdriver in winter. Batteries lie without work in a suitcase and slowly lose their charge. Once a month I put it on charge, and then put it back in my suitcase. This season with batteries is a real misfortune. Twist a couple of dozen small screws and the charge runs out. Even in a fully charged state, the spindle without load spins significantly slower than it should. What’s the matter? Did the motor burn out? We get the tester. the battery is only 6 volts, and it is in a charged state. So the motor has nothing to do with it. It was the case, one battery discharged almost to zero, so he refused to charge at all. Stick it in the charge. she blinks a couple of times with an LED and turns off. For the sake of experiment, I tried to connect the battery to a car charger.

The arrows indicate the terminals to which you want to connect. The ammeter on the charger immediately went off scale (> 10A). In total, I made several connections for 3-4 seconds, there was a feeling that something like a short circuit was happening. the charger is buzzing, the wires are slightly warm. After this "pink" The battery came to life and began to take charge from its own charger. Yes, and became more vigorous twist. Further. more. After another pause in work for about 2-3 weeks, the batteries again were barely alive. In the discharged state, the tester measured only about 2 V. It began to be connected to the car charger for a longer time. At first, the ammeter also went off scale, but after 5-6 connections for 10-20 seconds, the charging current dropped to 8 A. Right after that, the tester shows a 12V voltage on the battery, and the screwdriver turns like new, though not for long. But after a charging cycle in a standard charger with a battery, you can again work more or less normally, for example, wrap 120 mm screws.

Why all these manipulations? Batteries are sold separately, of course, but this is a lottery. my brother bought it from me, but the battery turned out to be crap, and for a year I didn’t work as expected. My batteries, if not for the shock of a large current, would already be in a landfill, and so, I hope this season will still work. Next year, I will try again to restore them in the same way. If it does not work out. have to buy something new. If a new screwdriver. then most likely the exact same, exceptionally reliable machine, and the screwdriver itself is a very convenient tool because of its mobility. It is a pity that the batteries turn sour without work, and so far there has been nothing to occupy them in the winter.

A small addition after a few months.

By the time I tried to revive the batteries with a large current, one of them was already worse. charged faster, worked less. And then, after another pause of two weeks, he again refused to charge. Then I connected both batteries alternately to the car charge for 10-15 minutes. The current was more than 5 A, probably closer to 7. After that, the battery, which was older, became even more cheerful. takes charge, twists, generally works (not like new of course, but for self-tapping screws up to 5-6 cm it is enough for work). And the second one was very hot, and after turning off the charging it was still quite hot for a long time and died completely. Here is such an experience.

Another addition two years after writing the article. By the described method, it was possible to sinfully support the screwdriver’s battery in half for episodic work that season. Well, after the winter, next season, the remaining battery also refused to charge. Buy screwdrivers with lithium-ion batteries, or whatever is on trend right now.