Chainsaws of the German company Stihl have gained fame for reliable and durable devices that can work both in domestic conditions. pruning trees or harvesting firewood, as well as in production. There are several models of chainsaws produced under this brand, and within the framework of this material we will take a closer look at the two most popular of them: MS 170 and MS 180, and reveal their similarities and differences.

This model is considered to be a model of reliability and quality of the company. In the entire history of production. more than 15 years at the time of writing these lines, the company has never subjected the model to serious modifications. "Stihl 180", as it was nicknamed in the vastness of our homeland, turned out to be actually an ideal saw. Due to the optimal proportions, the tool is quite versatile, suitable for trimming small branches, as well as for cutting wide parts (firewood, wood building materials). 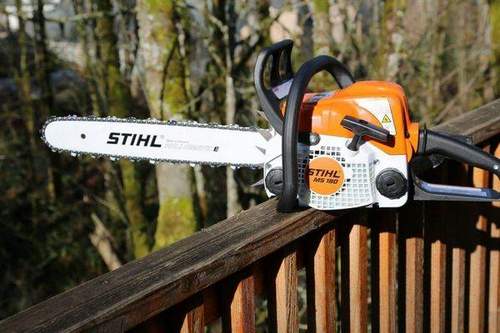 Reference! Most Stihl 180 problems are most often caused by the use of low-quality oil or fuel. In order for the tool to last as long as possible, the manufacturer recommends using only “consumables” specified in the technical documentation for the device.

It is quite convenient to work with “Calm 180” thanks to ergonomic handles and a small mass of the tool. the saw weighs only 3.8 kg. Saw engine. two-stroke, carburetor, with a displacement of 31.8 cubic meters. cm.

"Stihl 170 ”also has a good reputation in the domestic and foreign markets. The mass of the equipped tool reaches 3.9 kilograms. The model “feeds” with a fuel-oil mixture, and has an engine displacement of 30.1 cubic meters. see with a gas tank of 250 ml. Despite the fact that the device belongs to the class of household, it is often used in small construction.

Reference! In the process, the device produces up to 109 dB of noise, so it’s unlikely that it can work out after 11 pm without risk of waking up the neighbors.

In addition to the general manufacturing company, both models have a number of identical parameters. For example, they have identical fuel and oil tanks, the same tires.

If you put both models side by side, then it will be virtually impossible to distinguish them from the untrained eye (read. not to the manufacturer). The outlines of the body are completely identical, and the engine crankcase, carburetor and muffler have the same part numbers, which allows you to rearrange them from one model to another without any damage to the device. In addition, both units are equipped with a quick chain tensioning system, which allows you not to waste time pulling it mechanically.

What is the difference between Stihl MS 180 and MS 170

The main criterion for determining the difference between the Stihl 170 and Stihl 180 saws is the power of the installed engine. The Stihl 180 model is 0.3 horsepower more powerful than its counterpart.

See also  How To Choose A Sander For Wood

Reference! In addition to differences in the design and power of the engine, the “one hundred and eightieth” also weighs about 100 grams less than the MS 170.

If you look into the cylinders of the ICE of both models, you can understand that they also have structural differences. For a saw engine with an index of 170, the cylinder diameter is slightly (0.1 mm), but smaller than that of the MS 180.

Market rules are such that a more powerful product, ceteris paribus, gets a higher price than a less powerful one. This happened with the tools we are considering, and if the MS 170 has unconditional advantages over the MS 180, then the first in this list will be the price advantage.

Both saws, however, remain an excellent example of German quality gardening household appliances, and the difference between them becomes significant only in rare cases when working with particularly "difficult" material.