The New Stihl Chainsaw Will Not Start

See also  Proportion Of Oil And Gasoline For Stihl Chainsaw

We determine the availability of fuel and its supply.

First you need to make sure that there is a fuel mixture in the tank of a chainsaw that does not want to start, and it regularly enters the carburetor. With a full tank, we check how the mixture is fed through the gas line. Disconnect the fuel system pipe from the carburetor and try to pump it up. In the case of a complete order, when pumping, gasoline will be supplied in jerks in accordance with the standards set by the manufacturer. Poor or no fuel supply can result from:

Often the reason for a poor start of the chainsaw can be a tank that is too full. In this case, you should pay attention to the presence of smudges under the saw case cover. If present, see the connection of the gasoline feed pipe to the carburetor. Most often, it is squeezed out by pressure when the tank cap is screwed on, filled up to the very neck, which prevents the engine from starting.

The quality of the fuel mixture can also be one of the reasons why the chainsaw does not start. If, after completing the work, the remaining gasoline is not drained, and the tool is left for long-term storage (more than 2 weeks), then the processes of gum formation and polymerization of components will begin to occur inside the tank. What can cause carbon deposits on the piston, rings and cylinder liner. Therefore, always prepare the mixture only in the required amount before work.

Checking the condition of the fuel and air filters.

If everything is in order with the fuel quality, the chainsaw engine may not start due to clogged fuel and air filters. To diagnose these elements, it will be necessary to perform a number of manipulations associated with their dismantling.

For the fuel filter:

If there is little or no pressure in the pipe, disconnect the filter. Before this, free the tank from the mixture and remove the filter element itself. Dismantling is done with a wire hook. A clogged replacement cartridge that causes a poor starting of the chainsaw engine can be cleaned, but it is best to replace it with a new one. When operating the tool in dusty conditions, it should be cleaned on a regular basis.

A clogged air filter can cause the chainsaw engine to run erratically, making it stalling or difficult to start. Dust and dirt deposited on the adsorbent material impedes the flow of air into the system, making the fuel mixture so rich that starting the tool will sometimes be difficult. 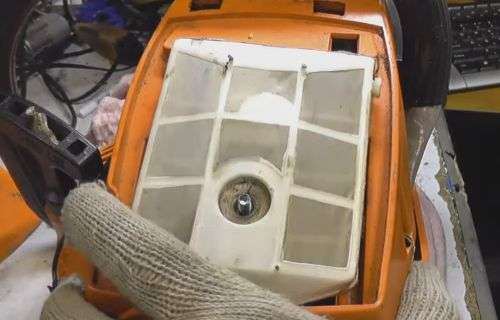 Checking the air filter is one of the first steps in finding the cause of a poor start.

Care must be taken when removing the air filter, as dust accumulated on the surface of the saw during operation can enter the carburetor. And this is fraught with more expensive repairs. After detaching the cartridge, thoroughly clean it from the accumulated dirt and rinse it with the addition of detergent. Dry the element and place it in place just as carefully.

Identification and elimination of obvious malfunctions of the chainsaw.

To determine the reason why the chainsaw does not start or stalls when starting, it is necessary to troubleshoot the tool. The essence of the procedure is to consistently inspect the condition and operation of the main working elements of the saw motor. At this stage, we check:

Checking the breather and cleaning it.

The breather is another element, from the improper operation of which the chainsaw may not start or stall during the sawing process. This element is located on the fuel tank cap in the area of ​​the air hole. This is a kind of valve that prevents gasoline from flowing out and equalizes the air pressure required for the free flow of fuel into the carburetor.

If the breather is dirty, the working chainsaw stalls, and when it starts it refuses to start. The thing is that air stops flowing through the hole. As a result, a negative pressure (vacuum) is created inside the fuel tank, preventing the flow of gasoline to the carburetor.

Defining the problem is pretty straightforward. Disconnect the fuel hose from the carburetor and see what happens to the gasoline. If it flows out without hindrance in a good trickle, then everything is in order with the breather. If it is absent or it flows weakly and intermittently, then the reason is identified the breather is clogged with dirt. You can solve the problem by cleaning the air hole with a regular needle or a powerful jet of compressed air.

Checking the spark on the spark plug and eliminating the cause.

The first step in looking for reasons why your gasoline saw won’t start is to check the spark on the spark plug. There are many factors that affect the performance of this element. However, the main ones at the initial stage of instrument troubleshooting are:

Checking the spark plug with an idle chainsaw

It is quite easy to check for a spark. This will require:

If a good spark is observed between the electrodes at the time the chainsaw engine starts, then everything is in order with the ignition unit. If it is not there, then it is worth cleaning the element itself and checking the gap of the electrodes. If necessary, use a special probe to adjust the distance between the contacts.

There may be no spark on the spark plug for other reasons. Of the main faults affecting the poor start of the chainsaw and the unstable operation of the internal combustion engine at idle, from which the tool can stall, the following can be attributed:

How to start a cold chainsaw if the candle channel is constantly flooding with gasoline? To eliminate the problem while starting the tool, you can use the following algorithm:

If there is no spark with poor contact of the high-voltage cradle with the spark plug tip, check the connection. The check can be done using a conventional tester. If a defect is found and its elimination, the chainsaw should start without any problems.

If the check showed that the contact is reliable, and the saw will not start further, look for the cause in the ignition unit. As a rule, a faulty unit cannot be repaired or restored. It will require a complete replacement.

Amateur and professional chainsaws are complex devices. The service life of their two-stroke engines, components and assemblies has its limitations. For this reason, quite reliable and expensive tools, along with cheap Chinese units, periodically fail and refuse to start. The situation when the chainsaw does not start or stalls is not very pleasant and sometimes confuses the user. How to identify and correct a malfunction by returning the instrument to work.

First of all, it is worth noting the fact that the 180 chainsaw of this manufacturer is one of his best creations, but it also has its drawbacks. Actually, about which we will now talk.

In order to exclude the saloon from damaged objects, it is necessary first of all to disconnect the fuel hose from the carburetor itself and actually check if fuel is leaking from it.

Over, it may be that the expiration date of your candle has simply passed, in which case it is necessary to replace it. Therefore, it is a great advice that it is best to always have a new candle in stock or, best of all, a set. Then you can replace it at any time and actually understand whether it was the direct cause of the device breakdown. Over, a weak contact can also be the cause of a breakdown, which actually connects the high-voltage wire and the end of the candle. Also, the cause may be a breakdown of the ignition unit. It is worth noting the fact that in order to eliminate this kind of problem, it is necessary to replace the unit itself, since it cannot be repaired.