Why is the engine warming up? Causes of Engine Overheating

With the onset of summer, many car owners have one of the most annoying problems. engine overheating. over, neither the owners of domestic cars, nor the owners of foreign cars are insured from this. In today’s article, we will consider why the engine is very hot and how to fix this problem.

In what situations does overheating occur most often? 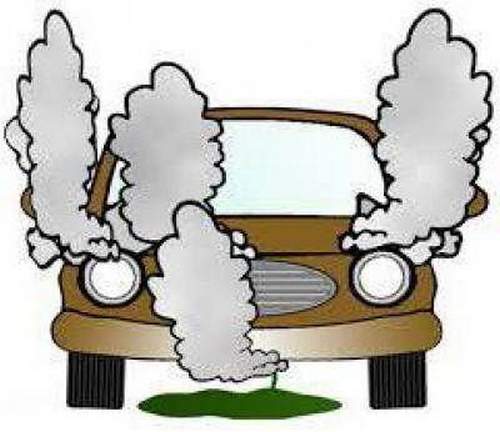 Especially often cars in traffic jams boil. After several tens of starts and stops, the arrow of the temperature gauge can jump to the limit even with a foreign car. It is clear that the engine is heated at idle more than at normal speeds. It is impossible to allow frequent boiling of the motor, since this can lead to a serious and expensive repair of the internal combustion engine.

So, our engine is often heated. The reasons for this can be very diverse. One of the probable problems is the impeller of the water pump. It is this part of the pump that may not provide normal fluid circulation through the cooling system. When the engine has been idling for a long time (for example, it is in a traffic jam), the antifreeze stagnates in the block. As a result, the coolant begins to boil, which is why the engine is warming. How to fix this problem? There is only one way out. to purchase and install a new water pump.

If the belt of the water pump breaks, the operating temperature of the engine will rapidly increase, since the coolant has stopped circulating in the system. This fault can be identified visually.

If the water pump is stuck, this will be evidenced by the characteristic screech of the belt slipping on the pulley. It is not possible to repair the pump manually. In this situation, it is recommended to search for a tugboat and go to the nearest car repair shop.

In the heat, this element can also affect the motor overheating. If there is a malfunction of the thermostat, the motor starts to heat up longer, and on the road to constantly increase its operating temperature. Therefore, if the engine is warming at speed, most likely the reason is the thermostat. A poor-quality part can simply jam. As a result, the half-open element is not able to provide normal heat transfer and coolant circulation at high speed. The way out of the situation is similar to the first case. the defective element must be replaced. By the way, many owners of domestic cars in the summer simply take out the thermostat and drive without it. The engine does not heat up on such cars throughout the hot season. Well, with the onset of autumn, motorists again install this element in its regular place.

READ  Installing a Lifan engine on a tiller ural

Note that the engine is not always heated due to the thermostat. Perhaps the reason for this may be the lack of coolant in the system (we will talk about this a bit later). Therefore, the thermostat is always tested for operability before replacement.

This can be done without removing it from the engine compartment. When the upper branch pipe (the one that goes to the cooling radiator) is cold or extremely hot (so that it is impossible to touch it) when the engine is running, respectively, the part does not pass liquid through itself. The thermostat itself is replaced only with a cooled engine.

There is another way to diagnose a thermostat. It consists in using a pot of water and a gas stove. When the liquid in the container is about to begin to boil, the thermostat inside it should open within a few seconds.

If this did not happen even when the water began to boil, then the device is inoperative. Thermostats cannot be repaired.

The main symptom, indicating a malfunction of the candles, is the unstable engine "cold". Sometimes the motor troits, and during acceleration there is a noticeable drop in power. All this is displayed not only on the dynamics, but also on the engine’s operating temperature, which reaches 100 degrees or more degrees Celsius. The reason for this is poor contact in the high-voltage ignition system, which interferes with the operation of one of the cylinders. It also happens that the candle itself has exhausted its resource and requires replacement. In this case, there will be black soot at its end.

Video: Why is the engine warming up? Causes of Engine Overheating

Why is the engine warming up? Coolant leak

If an antifreeze leak is observed in the system, this will certainly lead to overheating of the motor. It is very simple to determine this malfunction. As soon as the temperature arrow approaches the red mark, turn on the stove. If cold air instead of hot air flows from the nozzles, it means that there is not or insufficient amount of coolant in the system. It is because of this that the diesel engine and gasoline are heated in most of our motorists.

READ  How to Remove a Husqvarna Trimmer Engine

If the engine is warming (VAZ or Mercedes. Not so important) stably every 1-2 hours, the air cooling system may become the reason for this. In this case, it is necessary to drive the front of the car downhill (a flyover is an excellent option), open the tank and radiator cap and wait until after 10 minutes the air comes out on its own. This is the most effective way to eliminate air congestion in cars and SUVs.

The operation of the fan is directly related to its sensor. It is he who gives the signal when the engine temperature rises sharply. If the fan stops working, most likely the case is hidden in the sensor. The latter must be replaced in case of malfunction. Also, the fan turns on forcibly. To do this, just remove the terminal that goes to the sensor wire.

One of the most likely reasons why the engine is warming up is the presence of various deposits inside the system. Dirt along with distilled water can get on the nozzles, but more often it "lurks" in the radiator cells.

In order to eliminate this malfunction, the system must either be purged or cleaned. The latter method is more effective, since it uses abrasive chemistry to remove up to 99 percent of deposits that accumulated on the radiator walls for years.

It happens that after cleaning the engine again heats up the engine. "GAZelles" and other cars of domestic production in this case should be subjected to a purge of the radiator walls. The essence of this method is to remove various deposits that have accumulated on the outer part of the element. This can be midges, poplar fluff and other debris that interfered with the normal heat exchange of the radiator with the environment. You can purge or rinse the walls of the part manually, using a vacuum cleaner or hoses. But it’s best if garbage can be cleaned up under great pressure. At the same time, remember that the radiator cells are very fragile and thin, so the purge is carried out from the back of it. Those small parts that could not be cleaned with a hose or vacuum cleaner are manually cleaned with a thin sewing needle, nail and other small tools.

As practice shows, after external and internal cleaning of the system, most motorists no longer ask questions about why the engine is warming up, and how to prevent antifreeze boiling. over, such a method is effective not only on domestic, but also on imported cars.

How to behave if the engine quickly heats up?

When you notice that the temperature arrow smoothly enters the red scale, immediately turn on the stove at maximum power and press against the curb.

After 15 minutes, carefully unscrew the radiator valve. At this time, hot vapors can get on the surface of your hands and cause a burn, so do this when you have clothes with long hands on you. As soon as the water and vapors go to the side, carefully add the missing coolant to the radiator.

For a greater effect, you should force the fan to turn on, which will supply cold air to the engine, thereby cooling it (we told how to do this in the middle of the article).

Continue to move further extremely carefully. You should go with the interior heater turned on at a speed of no more than 50 kilometers per hour. This speed is quite enough for the oncoming flow to blow over the radiator, and the load on the motor will not be so great.

If you need to unscrew the cap of the expansion tank, remember that this should not be done with a boiled motor. Modern cars are equipped with motors with a working temperature of up to 100 degrees Celsius, while their SOD is constantly working under pressure. And since when heated, the antifreeze has the property to expand, it, together with the air, will push the cork out with incredible force.

So, we found out the reasons why the engine is warming up, and also talked about ways to eliminate them. Finally, we give a little advice. Since it is very difficult to determine the motor overheating while in the driver’s seat, you should develop a stable habit. after a short period of time look at the arrow of the engine temperature. So you can always notice the presence of a problem on time and prevent expensive ICE repairs.