How Often To Sharpen A Chainsaw Chain 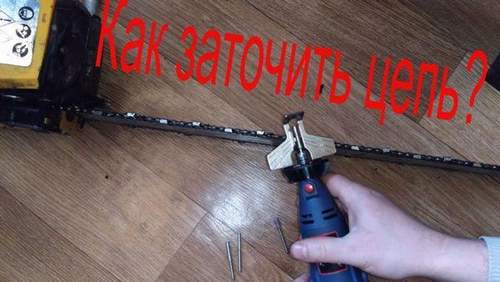 The reliable operation of the chainsaw, like any other mechanism, largely depends on the serviceability of all the elements that make up its design. The quality and speed of sawing wood is determined by the sharpness of the working chain, driven into rotational motion by a two-stroke internal combustion engine.

Intensive use of the tool leads to grinding of the cutting edges of the chain, as a result of operational characteristics and productivity decreases. The pointed elements grind especially strongly in contact with the soil and the stones and other solid inclusions contained in it.

A blunt chainsaw chain has a negative effect on the entire design of the tool due to the fact that when operating with such a working element, it is subjected to significantly greater loads than the calculated ones. This is due to the fact that when working with a blunt chain, considerable physical effort must be applied to draw the blade into the cutting strip. Fatigue quickly sets in, labor productivity decreases.

These signs indicate the need for urgent sharpening of the chainsaw. With intensive use, this procedure must be performed several times during the working day. According to experts, the correct and timely sharpening of the chain extends the life of the tool by several years. To do a lot of work, a sharp chain is more important than a good engine.

The general rule for performing this manipulation is the exact location of the tool used relative to the cutting teeth. The configuration of their inner part is a circle, so sharpening is done with a round file. The cross section of the tool is determined by the dimensional characteristics of the chain. The size of its step usually varies from four to five and a half millimeters, on the basis of this, the desired section of the file is selected.

See also  Which chainsaw is better than Husqvarna or STIHL

Sharpening rules provide for the location of the tool at right angles to the vertical plane of the workpiece, the horizontal angle can be ten or thirty degrees, depending on the configuration of the cutting tooth. Over the edge of the chain, the file should protrude by twenty percent of its diameter.

How to file a chain properly

Correctly sharpening the chain with a file helps installing the chainsaw horizontally on a flat surface. Then, using a visual inspection, the presence of visible defects in the circuit is determined, after which it is tensioned and stopped by the brake system. To hold the canvas during operation, a stand from improvised materials is placed under it, or it is fixed with a factory-made clamp included in the package.

The file is moved from the inside edge of the cutting tooth to the outside. The tool is located along the factory mark indicating the correct sharpening angle. For the convenience of the procedure, the processed element should be located approximately in the center of the chain, then the brake is released, the blade moves and is fixed again in order to sharpen the next section of the chain.

Video: How Often To Sharpen A Chainsaw Chain

When sharpening with a file, it is necessary to fix the chain and ensure the correct movement of the tool

It is recommended to perform the same number of file moves to sharpen all cutting elements, but it often turns out that their wear is different, so this is not always possible. To facilitate the performance of the work, restraints are used with standard sharpening angles indicated on them.

It is not recommended to constantly grind the chain teeth with a file for the following reasons:

Obviously, mastering the grinding process manually without experience is not easy. We recommend watching a video demonstrating the process of working with a file.

There are many devices for performing high-quality and quick sharpening of the chain. A widely used set includes a round file with a device for holding it, a flat file with a dimensional template used to process the depth gauge, and a hook cleaner for sawdust clogged between the elements of the blade.

The marking on the device for holding the round file ensures its correct orientation with respect to the machined cutting element. The tool holder and cross section are selected so that the file rises one fifth of its diameter from the top of the work surface.

Maintaining the desired position of the holder and pressing the tool against the tooth edge without undue effort, reciprocating movements are made, and the file must be rotated regularly to avoid wear of its surface on one side.

High-quality file chain sharpening is not always possible with prolonged use of the mechanism without regular maintenance or with frequent contact of the teeth with stones and other solid parts of the ground, during which they are significantly deformed and lose their shape. In this case, electric and manual machines are used. The former are equipped with grinding wheels that are driven by electric current, the latter are a type of mechanical device.

The principle of operation of hand-held sharpening machines resembles a beam-type saw, in which a file of circular cross section of the corresponding length is fixed instead of the blade. A rather intricate device with mechanical tuning makes it possible to position the tool with the desired orientation to the smallest control tooth, which is sharpened in several movements.

The parameters of the sharpening angle are saved during the correction of the next cutting element, thus, not only sharpening is quickly and efficiently performed, but also straightening the chain for a single tooth size. To process the limiter with a manual machine, it is necessary to insert a flat tool instead of a round file.

Significantly simplifies and simplifies the process of performing work the use of an electric machine. The grinding angle on this unit is ensured by an accurate tuning system, which allows you to bring the grinding wheel with a verified orientation directly to the cutting edge of the machined surface, while the tire is automatically locked.

How to sharpen a chain with an angle grinder

The use of an angle grinder as a tool for sharpening a chain is fraught with some difficulties. To perform this work, the machine must perform the following manipulations:

an angle grinder will make work easier, but quality and safety are questionable

In this process, it is very difficult to maintain the required sharpening angle, so the teeth can differ in surface configuration, which will adversely affect the further operation of the tool. To do this job you need a faithful eye and a steady hand.

In addition, there is a risk of damage to the cutting blade of the grinding machine of the connecting elements of the chain, this can lead to its riveting under load and a sharp outreach in an arbitrary direction.