Installing a Lifan engine on a tiller ural

Selection and installation of the engine on the Ural tiller 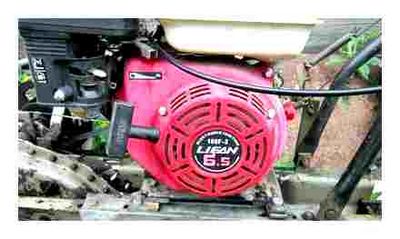 All gardeners and gardeners prepare their plots with the beginning of seasonal work. Many people use tillery for plowing the land. But not everyone can buy the latest models and continue to use the legacy of the Soviet Union. One such unit will be discussed today.

Tillers “Ural-UMP-5V” first began to be sold in the country just before its global redistribution at the dawn of the 90s of the last century. Since many people needed tillers as a convenient and cheap technical means, therefore it became very popular in the USSR. In just a few years, its sales reached 150 thousand units. Such popularity of the tiller was facilitated by the optimal combination of its characteristics.

The developers were able to combine the high performance of the tiller, which was achieved by a five-horsepower gasoline unit that accelerates it to a speed of 15 km / h, combined with the power of the batteries, sufficient to process up to 2 hectares of arable land. In addition, the unit could carry loads of up to half a ton in weight.

The tiller has a wide adjustable ground clearance, which allows the device to be operated on different types of sites. But it should be noted that the basic model of the “Ural” is not particularly versatile. It can only transport goods and cultivate the soil. Mowing grass, removing garbage or snow using attachments will not work with this technique. such opportunities are not provided. But if you independently redo the structure by adding the necessary fasteners, then you can expand its functionality.

The model is implemented according to the scheme of power transfer to the wheels through a differential. Some modifications use foreign high-power engines, but domestic versions are the most popular due to the availability of spare parts, proper documentation and durability of operation.

Here are some data on tiller.

Advantages of the Ural tiller:

At the same time, the following disadvantages were also noted:

Engines UMZ-5B and its variant UMZ-5DU-B have the following characteristics:

The UMZ-5DU-B model differs in that its gearbox is single-stage and its gear ratio is 1 to 6, and a ratchet is not installed on the gearbox shaft.

As an alternative to the Ural engines, if it becomes necessary to replace it, they often choose imported products from the Chinese manufacturer Lifan (Lifan).

Lifan was founded in the early 90s of the twentieth century and today is one of the most famous large companies in the automotive market in our country. In addition to engines, Lifan also produces other motor vehicles with an optimal price-quality ratio. The products are certified, and each product must be accompanied by a technical passport and operating instructions.

Lifan presents different types of engines on the Russian market. One of the most important characteristics when choosing an engine is the mounting dimensions, since they do not always correspond to Russian standards.

See also  How To Adjust The Clutch On The Tiller

Disassembly itself is not particularly difficult and is performed in a couple of stages even by a specialist with little or no experience.

The 168F-2 engine is of interest to buyers in that it differs from the previous version in its increased resource and higher parameters. it is more powerful (6.5 hp), has a larger cylinder (196 cc).

Engines in 9 liters. from. represented by Lifan 177F models:

According to their traction characteristics, the tillers are divided into classes.

we can say that the current market offers different tiller engines, both Russian and imported, and in many cases they are interchangeable.

How to install the Lifan 168f-2 engine on the Ural tiller, see the video.

In the design of this tiller, a Lifan 188FD engine is installed, it is equipped with an electric coil with a power of 7A, which allows you to connect various electrical equipment to it.

The advantages of this engine:

the Oka tiller with a Lifan engine has a power take-off shaft, which allows the device to be aggregated with various attachments, which must be purchased separately.

The Tiller Oka has a fairly heavy frame, which makes it possible to use the unit on the most difficult soil areas.

The Tiller Oka device uses the Lifan 168F-2 engine, which is considered the most powerful in its line. A manual starter and a reduction gear are supplied with it.

For more information about the operation of the Lifan 168F-2 engine, see

This Lifan engine for Tiller Oka, has enough powerful characteristics for use in relatively small areas.

Tiller Ural with a Lifan engine is a rather unpretentious device that does not require frequent repair actions.

The Lifan 170F motor used in this tiller can also be used in other units. Salyut, Favorite, etc.

Many people ask. how to break in the tiller Oka, Cayman, Patriot, Texas, Foreman, Crossser, Viking, Forza. The answer is quite simple. you need to start the engine, and then immediately proceed to cultivating the land, but at medium speed. In this case, it is impossible to run idle, because oil starvation may occur.

The oil change in the tiller containing the Lifan engine should be carried out as follows:

Many people ask. what kind of oil to pour into the Lifan tiller engine? In general, each instruction directly indicates the name of the oil that it is desirable to fill. In general, most often recommends SAE-30 summer oil, or SAE-10W-30 multigrade oil.

How to install a Lifan (Lifan) engine on a Tiller Ural. valve adjustment

Lifan tillers refer to small-scale mechanization tools that are widely used in agriculture. Their popularity is based on many factors, including a relatively low cost and high technical and performance indicators.

As in any other technical unit, there are certain operational problems in Lifan engines. This is not due to the poor quality of the motors, but to certain circumstances, which, quite often, are associated with the consumer himself.

Perhaps the main problem is as follows. the Lifan tiller does not start. There may be several reasons:

In fact, this is how the main repair of the Lifan engine for the tiller is carried out with your own hands. In principle, the instructions for the engine provide all the detailed information regarding possible breakdowns, as well as methods for their elimination.

Lifan tillers, spare parts for which can be purchased from authorized dealers, have certain requirements for components. In particular, the manufacturer advises using only those parts that are produced by Lifan itself when carrying out repairs.

According to their traction characteristics, the tillers are divided into classes.

See also  How To Start An Eye Tiller

we can say that the current market offers different tiller engines, both Russian and imported, and in many cases they are interchangeable.

How to install the Lifan 168f-2 engine on the Ural tiller, see the video.

Characteristics and description of popular modifications of the Ural Tiller

Tiller Ural was produced from 1990 to 1998 by the defense enterprise TsMPO, located on the territory of Bashkiria. The production was discontinued due to the development of the modernized Agros model. Products under the Ural brand belonged to the number of popular brands. over 8 years of production, more than 100 thousand copies were produced.

Based on the reviews of the Ural model range, a number of advantages can be distinguished:

The owners point out the disadvantages:

This engine does not have any special distinguishing technical characteristics from UMP 5V. The only thing is that it is capable of working on AI-72 fuel, but this affects the operational characteristics of the Ural tiller.

A large amount of carbon deposits begins to form on the cylinders and spark plugs, the stability of revolutions and power in general decreases.

Ural ZID 4.5 was produced as an experimental model, which was not widely used.

Ural products with ZiD or UMP engines are estimated by their owners at 9 to 15 thousand rubles. Tillers with Chinese motors on sale are rare, their.

the tiller is used for plowing a personal plot. During the work there were problems with the ignition. After installing the coil from the contact ignition of a VAZ car, the situation has improved. Instead of a magneto, a battery from a computer uninterruptible power supply unit is used. The ignition works stably throughout the entire rev range. The engine is stopped by turning off the power supply from the battery.

the tiller was purchased together with the house and plot in the village. Maintenance requirements are low, the engine started after replacing the spark plug, wires and adjusting the ignition gaps. During operation, it is necessary to compensate for the slight tilt to the side arising from the heavy flywheel. Gasoline A92 is used for work, since A80 fuel is not produced.

The first Ural Tillers were released in the early 90s and continue to be produced to this day. Over the entire period of its long history, this technique has found application throughout the territory of the CIS countries, regardless of the type of soil and climatic zone.

Due to the popularity of this model, the manufacturer has released several modifications of the Ural chillers, which differ in the installed engines.

The most popular are those devices that are equipped with domestic motors. The main reason for this choice is the availability of spare parts and their low cost.

Potatoes are a very common crop in our region. However, planting and excavating it takes a lot of time and effort. In order to mechanize this labor, appropriate attachments are used.

The following video review demonstrates one of the ways to plant potatoes with the Ural Tiller: