So, the stihl ms 180 carburetor is developed and manufactured by a subsidiary of Stihl, called Zama. Original carburetors, on their body have a company logo that guarantees product quality.

When to adjust the Stihl 180 carburetor

First, it is worth deciding why it may even be necessary to adjust and repair the stihl ms 180 carburetor. So, this must be done in the following cases:

This list can be continued for a long time, but we have identified the main reasons. Before proceeding with the adjustment, you need to know what are the main parts of the carburetor on the Stihl 180 chainsaw, and who makes it.

The stihl ms 180 chainsaws are designed to make their use as easy as possible for inexperienced users. To this end, some of the settings available on the more powerful Stihl models have been abolished in the saw carburetor. But the ability to adjust is still there, and repair, as well as adjusting the carburetor of the Stihl 180 chainsaw with your own hands, is possible. 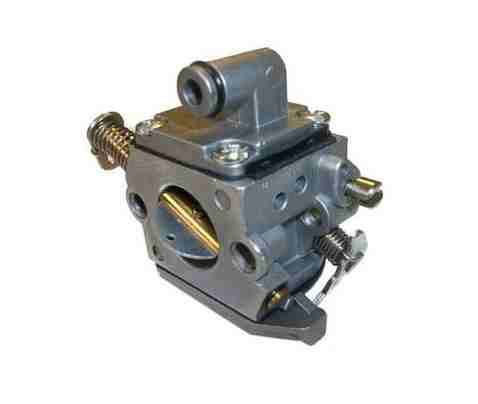 The carburetor choke is installed on the opposite side of the throttle and is responsible for starting a cold engine, it is controlled by the engine control lever. For a cold start, the air damper is completely closed, for normal operation, open.

The throttle valve is installed in the carburetor body and is responsible for increasing the supply of the fuel mixture directly to the engine cylinder. At the moment of pressing the gas, the throttle valve opens slightly, thereby increasing the throughput of the channel and fuel from the carburetor cavity, rushes into the cylinder in a larger volume.

Combustion of a larger volume of fuel increases the amount of generated energy, which affects the power and speed of the processes. The damper is installed on the shaft passing through the entire carburetor body. At the exit of the shaft from the body, a mount for the gas cable is installed, next to it is a cone-shaped adjusting screw responsible for adjusting the idle speed. By tightening the screw, you can slightly adjust the position of the shaft and the damper installed on it, thereby increasing or decreasing the idle speed, slightly opening or vice versa closing the damper.

The carburetor of the Stihl 180 chainsaw, indiscriminately, can only be adjusted by the number of idle revolutions. It is impossible to increase or decrease the fuel supply in different modes using special screws. The manufacturer restricts access to adjustments and does not install these screws. How to adjust the carburetor to the correct idle speed is described in great detail in the manufacturer’s instructions.

In the event of certain malfunctions, and with experience, it is possible to increase or decrease the fuel supply by increasing the clearance when opening the needle valve.

To increase the flow, the rocker arm of the needle valve in the distribution chamber must be bent up, and to decrease, down. This regulates the stroke of the needle and, accordingly, the throughput of the valve.

It is not necessary to carry out the adjustment yourself, since this must be done very accurately and in case of an error it is almost impossible to return the original position of the rocker arm.

In order to purge, change gaskets or the needle valve, the carburetor must be disassembled. To do this, unscrew 4 screws on the expansion joint cover and one on the fuel pump.

Having opened the case, you should be extremely careful, because if debris gets into the inside of the carburetor, it will make its work impossible. The thickness of the channels in it is comparable to the thickness of a thread or even a human hair.

A video for repairing a Stihl 180 carburetor can be viewed below. In it, the wizard tells in detail about the problems and clearly demonstrates the entire repair process.

Important: when repairing the ignition of a chainsaw, special attention should be paid to setting the correct gap between the module and the flywheel.

You should also check if the flywheel is clinging to the module with the counterweight. If this happens, you may have a bearing failure or a backlash on the shaft.

All gasoline two-stroke engines have a similar operating principle, and therefore the ignition system in them has a typical structure and device.

If the saw does not start, the first thing to check is the spark, which gives off a spark that ignites the fuel in the cylinder. Start by removing the high voltage wire that the plug is connected to. Then remove the spark plug from the cylinder cover and check its condition. When used correctly, the candle should be dry and fine on fine ceramics:

If you did not find an obvious cause of the malfunction here, the candle is dry, light sediment continues to go from the opposite side. Since this is the end point of ignition of the working mixture. Now check to see if the spark ignites the candle. This is the ignition system block.

A feature of the Stihl chainsaw carburetor is the presence of 1 screw, which is responsible for adjusting the idle speed. During the operation of the equipment, it is always necessary to pay attention to the idle speed. A few simple steps will help to adjust this: checking the air filter, as well as the spark protection grille.

It is worth noting that repairing a Stihl chainsaw carburetor is considered a laborious process. The article discusses in detail the adjustment of the spark plug for the Stihl 180 chainsaw. If for some reason it stopped starting, you must do the following:

As we have already noted, you can adjust the ignition system both in the workshop and at home. To do this, you need ordinary wrenches, a screwdriver and a 0.4 mm dipstick (you can make a dipstick with your own hands from scrap materials. plain copier paper, a plastic bottle, etc.).

All engines, whether it be a car or other tool with an internal combustion engine, work in a similar way.

There are no exception such outstanding chainsaws and are gladly used by consumers such as Goodluck, Calm or Husqvarna.

Drive in them. these are all the familiar internal combustion engine, respectively, the fuel tank, the engine and the working body that performs the work itself, as well as other hinge bodies that help in control.

Sometimes, during operation, some problems may arise in this rather reliable tool, such as a chainsaw.

HOW-TO Fix A Chainsaw With No Spark. Ignition Module Replacement

The Stihl MS 180 chainsaw is considered one of the most reliable among the models in its segment. But the technique is the technique, and sometimes malfunctions occur, for the elimination of which it may be necessary to repair stihl ms 180.

You will learn more about the repair of units by reading the article.

They have fewer moving parts and no contacts that need to be exposed periodically, often failing. The reel used on a modern chainsaw will work until the end of the service life of your tool. The chainsaw has become much more reliable and easier to maintain.

The main problem in this group is the engine.

Ignition is one of the main elements affecting the trouble-free operation of the tool. Therefore, we will first consider this particular block.

Gone are the days when a cam-moving contact breaker was in control of the ignition, which supplied a spark to the spark plug.

It was not a very reliable system due to the many elements that affected the operation of the engine. The chainsaw, with no visible malfunctions, could simply stop starting. And we could observe a picture of constant tugging at the winding cord. To date, manufacturers have switched to contactless ignition systems.

All engines, whether it be a car or other tool with an internal combustion engine, work in a similar way.

There are no exception such outstanding chainsaws and are gladly used by consumers such as Goodluck, Calm or Husqvarna.

Drive in them. these are all the familiar internal combustion engine, respectively, the fuel tank, the engine and the working body that performs the work itself, as well as other hinge bodies that help in control.

Sometimes, during operation, some problems may arise in this rather reliable tool, such as a chainsaw.

And also watch the video Dismantling the STIHL MS180 chainsaw

Good evening, I have such a problem. saw Stihl ms180c, worked a little, saw trees last time, there were interruptions in the operation of the engine. Then it stalled. what I did not do, 0, disassembled the blew, cleaned, the carburetor, assembled it, started up with a half-turn, worked fine, gained momentum, stalled, and again 0, replaced the spark plug. ignition coil, 0, disassembled carburet, clean, blew, assembled, started. and worked again, the gasoline ran out, I poured it a little, poured gasoline, everything is 0 again, the candle is wet, there is a spark, tell me. how to solve this problem, described meticulously, to make it clearer, can anyone come across this problem.

Hello, and when you turned out the candle, did you try it? is there a spark? it happens that there is a spark and everything seems to be in order, but the saw still does not start. I really had the same situation on another brand. it turned out there was no compression. changed the oil seals and seems to be still working (for the second year already). there is still a problem. filters. changed them? in general, a bunch, each time different answers, so as not to bother for a long time, try the service, if it is too expensive, then.

READ  Where can I sharpen a chainsaw chain

Direct disassembly of the Stihl 180 begins with the removal of the handle, which is attached to the body of the chainsaw using three rubber shock absorbers. To remove, it is necessary to remove the plastic plugs from the inner cavity of the shock absorbers, then, using a powerful screwdriver, squeeze out the upper shock absorber first, then the one closer to the rear handle.

When the handle remains on one shock absorber, it is necessary to unscrew the body of the chainsaw from the inside of the handle and bend it to the side, remove the body from the last rubber band.

Types of malfunctions and repair of the Stihl 180 chainsaw

A common type of chain saw is a chainsaw. Such a device is widely used in construction work, wood harvesting and other various operations with wood. But no matter how high-quality the device is, malfunctions may occur in its operation. It is more profitable to repair the Stihl 180 chainsaw on your own, as it will save not only money, but also help to understand its structure.